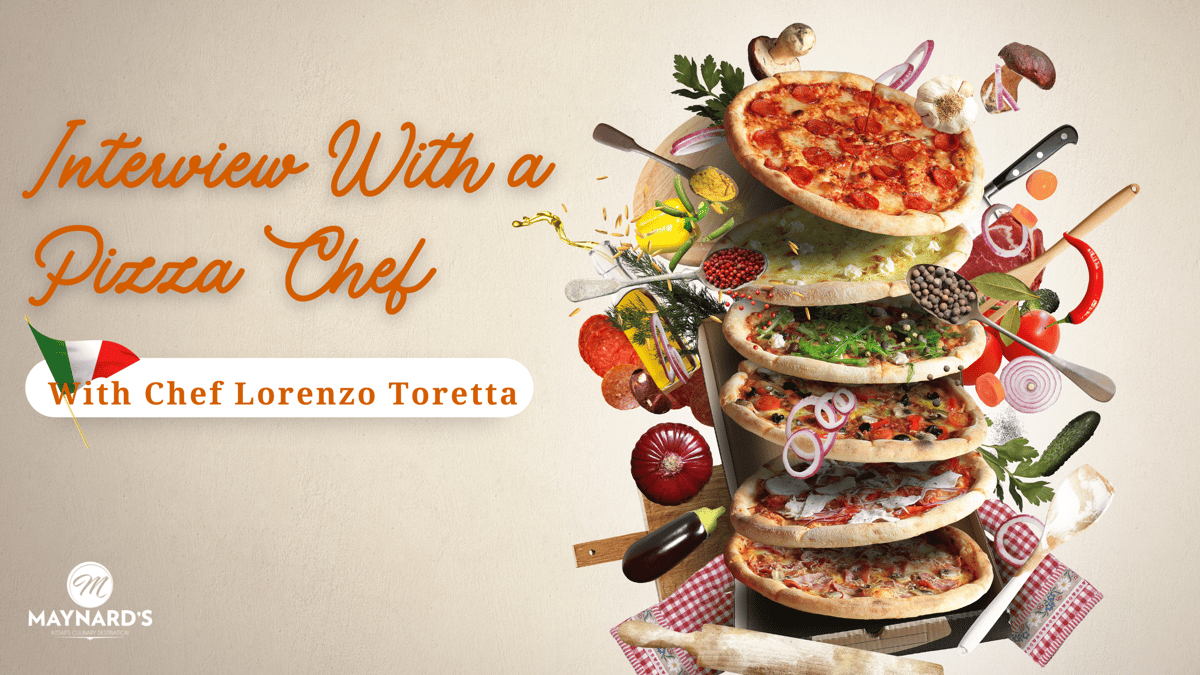 How One Chef is Keeping Italian Pizza Traditions Alive and Well...In Silverdale 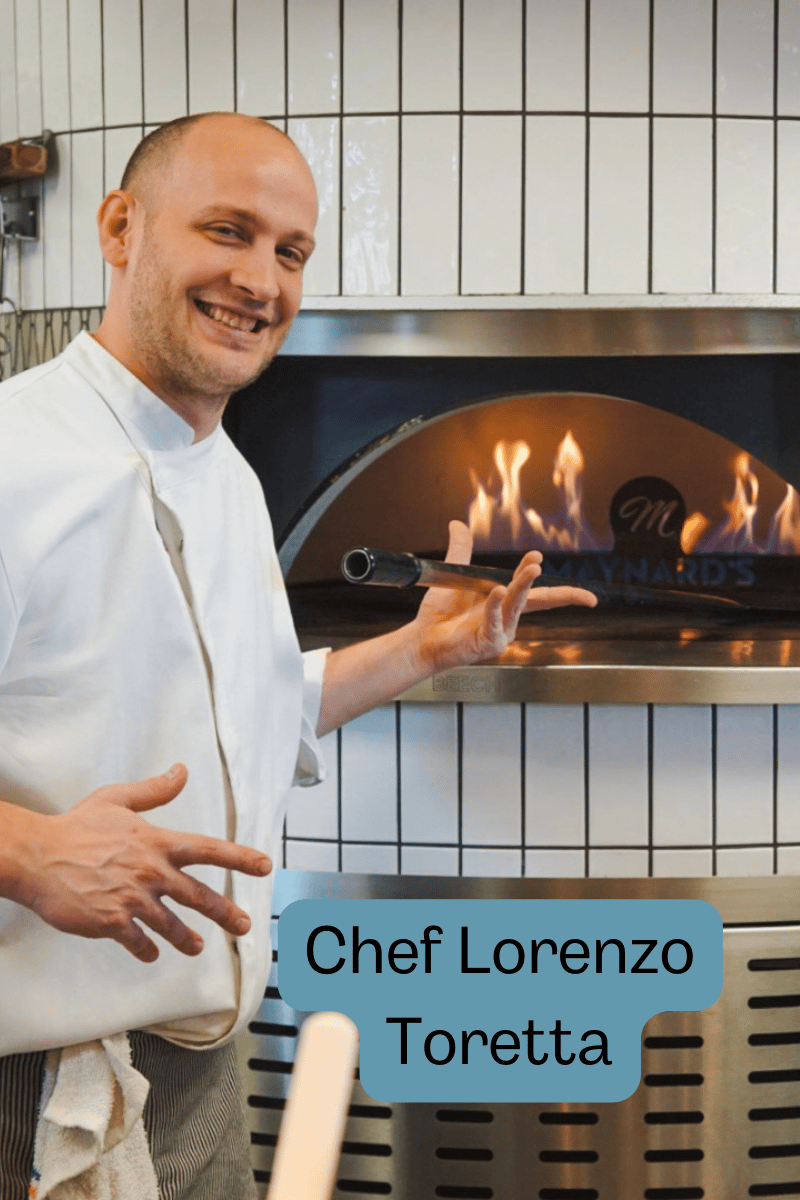 Each and every day, the hearth at Maynard's Restaurant in Silverdale, WA is kept hot and brought to 800 degrees Fahrenheit. The temperature is essential to perfectly cooked pizzas, calzones, and stromboli. Here, Chef Lorenzo Toretta goes to work, quickly preparing his mise en place, including fresh dough and cheese to be used for the day's orders. Chef Lorenzo loves pizza, and his passion for a globally-popular food staple has taken him across the globe, from his culinary roots in Italy to now sharing that same passion with guests at Maynard's Restaurant in the Pacific Northwest. We sat down with Chef Lorenzo to learn a little more about him and where his passion for Pizza comes from.

How long have you been making pizzas and what got you started?

Chef Lorenzo: Well, what got me started is my wife. When I met my wife,  I was working in a cafeteria, making coffees and doing some cooking, helping and working with my brother, but no more than that. But when we got married, I had to decide what kind of job and career I wanted before moving here to the United States. So, some part of me just decided to go to culinary school. I went hardcore in school, but then I decided I much rather take a little shortcut and learn how to make pizza. I had a couple of friends at the time who were working as pizza chefs, as it was very common where I'm from. One of them, who was a couple of years younger than me, was really happy to teach me the art and craft when I asked. The next thing I know, I was right away working at a pizza place. And so I started - oh my God - Now it's I think nine years ago when I started making pizza.

So, you went to culinary school in Italy to learn how to make Pizza?

Chef Lorenzo: Yes. I went to school to learn the basics of the flours and the yeasts; how to work them into the dough and I got to experiment with different mixtures, and get practice on the basics of pizza making. But then in Italy, a lot of time, unless you want to be a chef, culinary school was really a waste of time. Culinary school was going to take like four or five years, and I wanted to focus on pizza! I wanted to finish quickly and at the same time, I wanted to be ready for a job. I went for a few months and it was a full forty hours a week there. After that, when I went to get my first job, my friend introduced me to a chef and then introduced me to the owner of a pizza restaurant. They put me to work, and  I was literally working hardcore - like sixty hours a week. As an apprentice, pretty much worked every day, sixty hours a week and I tried to work as much as possible to get paid. I worked there for like two, or three years. And I was taking my time for a year or two to come into the states too, to stay with my now wife. So that was hardcore but fun time. A lot of sacrifices, but I learned mostly from my job, more than from actual school. School gave me the basics of all the flour work and everything else.

What do you love about the pizza-making process?

Chef: What I love about making pizza is that it keeps me happy. Making pizza is not as easy as a lot of people may think. It takes a long time to master, and it makes you creative because it's really difficult to make one pizza the same as the next one. It gives me pleasure in seeing what I can do, what I'm doing every night. Making Pizza just keeps my blood pressure going, and the adrenaline going, because if you make one mistake, you'd have to remake everything. It's really a different feeling than just cooking. I love everything about the process from start to finish.

Also, I love meeting other pizza chefs. It's a different approach than when you talk with chefs. Most of the time, they are just Pizza guys; They tend to be a little bit frenetic, And some even sort of crazy. It's probably because of the number of hours that we put in the kitchen - we work hard but it's really a lot of pressure. 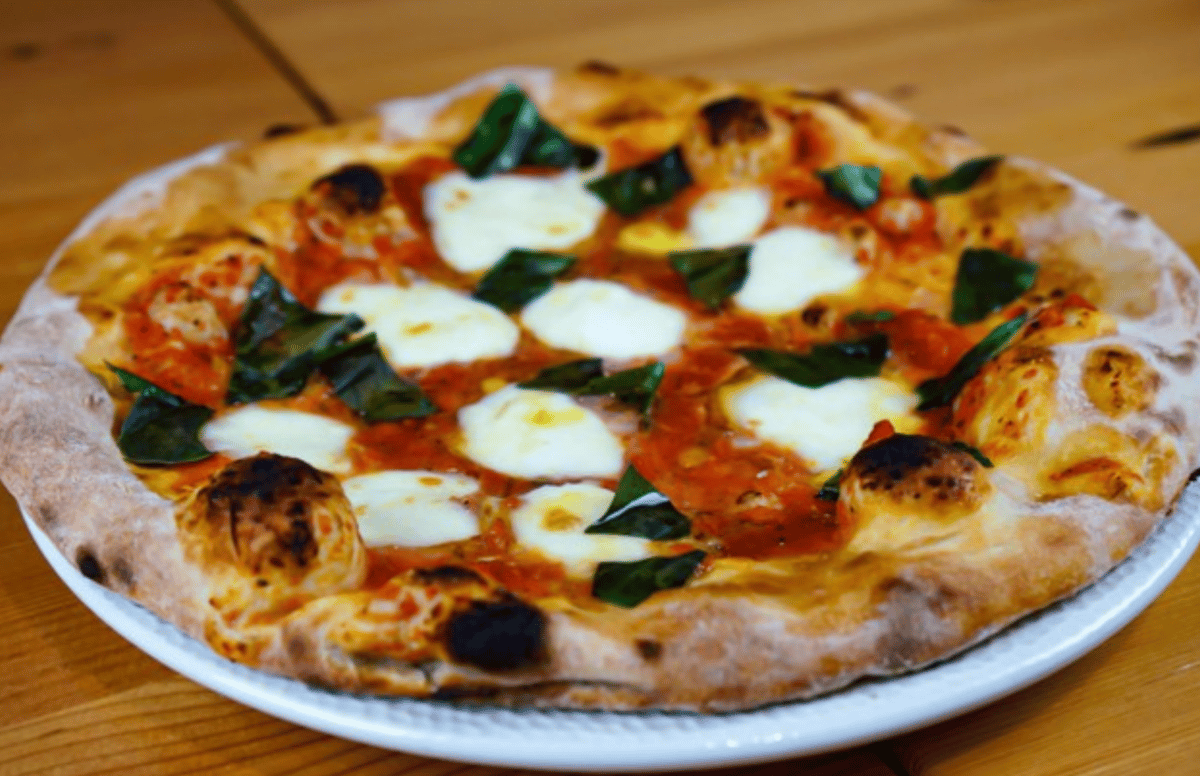 What's your favorite pizza to eat?

My favorite Pizza is one that I was having in Rome all the time. It has an olive oil base. Then I put fresh mozzarella. A little, spicy sausage and roasted potato, cut into thicker chunks, with salt and pepper and rosemary. But really I love everything pizza.

You can do almost anything with pizza. There is the fried pizza and calzones. There are appetizers you can do with the pizza dough. You can just fry pieces of dough with - I don't know - vegetables and cheese and eat it like that. That's really stuff that comes from the south of Italy. And then you have the street food. Pizza really is popular street food. In places like Naples, there is a lot of places where they have like literally like a fire oven and sell-out constantly. Then they just make pizza and they roll it as a sandwich and sell that, they fold it for and you just eat on the street. But it is the most common thing for like a Thursday night on the street - a cart where when the light comes on, they just give you the pizza with a piece of foil and paper to soak up the oil and you just break in pieces and you eat it while hanging out or looking around. That's something that is more common in Naples, so in the south of Italy.

Pizza is usually more of a nighttime food in Italy. Pizza Pubs are common all around. When you decided to have something light and you don’t want a steak or pasta - you know, heavy food - You get pizza. It's a great choice for a peaceful night out or a peaceful dinner.

Speaking of Calzones and different types of Pizza - What's the difference between pizza, stromboli, and calzone? Is there a cultural difference in the way they are eaten in Italy?

Chef Lorenzo: So for pizza and calzones, it can be considered our street food in Italy. Pizza is very common. The calzone, usually is a different type of baking, because it's not just a big open bake. It bakes and it needs to be sealed off. So the steam actually cooks the ingredients. You fold it and seal in all the ingredients, allowing the inside to cook and get steamy, filling up with air. So that's why they're kind of big. You fill it up and it looks like there is a lot of ingredients inside, but it's puffy because of the air.

Stromboli is from Philadelphia. It was actually an American Italian who invented it because he wanted to find something quick and easy to make to be sold in place of a sandwich for someone with Italian tastes. What I learned was that some people make Stromboli at the moment to order, some people cook the dough first and then roll it up again with ingredients like a burrito. If you want it to look like a sandwich, you just fill it with the ingredients, get some sauce on top and cook it evenly. Then you just serve it as a sandwich. 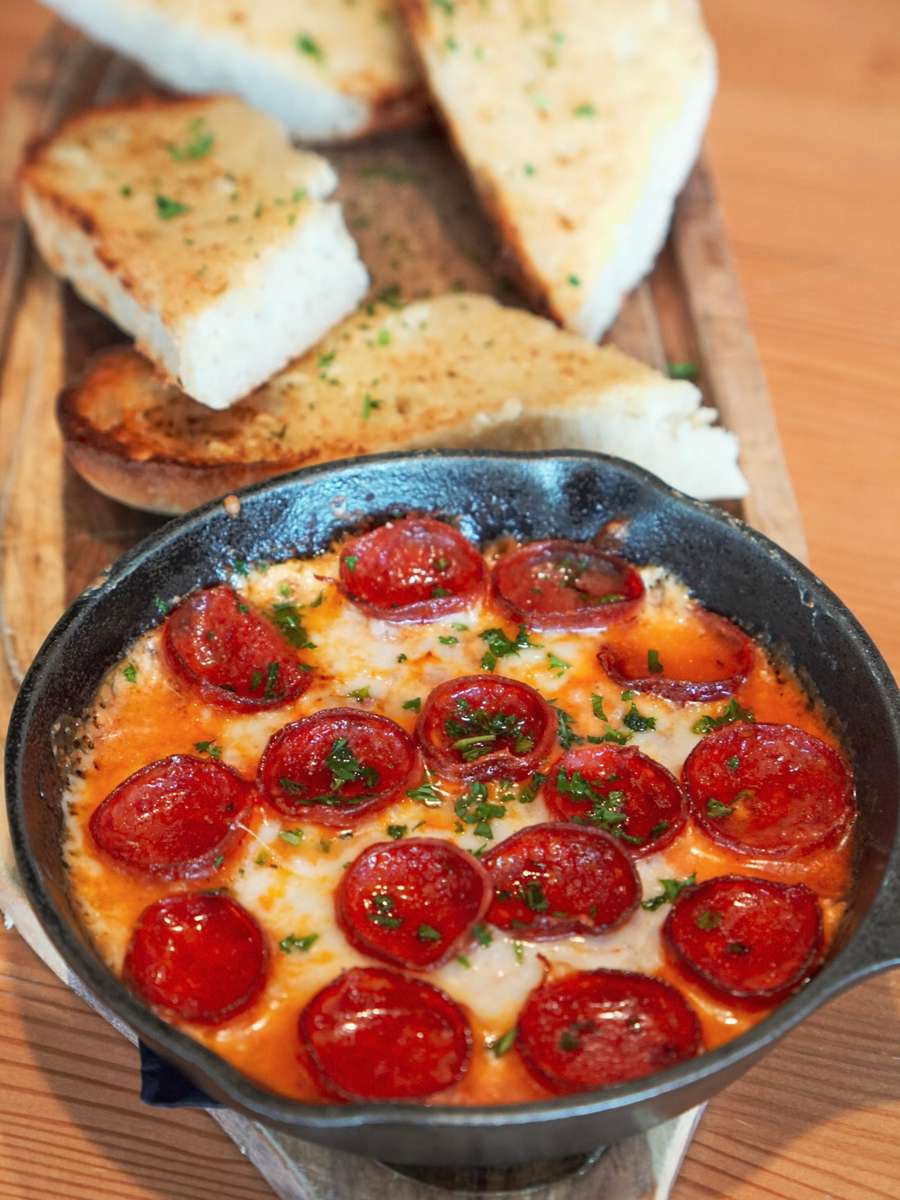 At Maynard's Restaurant, how do you translate your knowledge and experience into the Pizza and food you serve every day?

I feel like I want to continue to expand my Pizza knowledge and push the boundaries of what we understand what pizza is, getting a little bit more contemporary. I do more research on different ingredients to level up the quality. In a lot of places, I had to adapt to whatever ingredients that my boss picked. But finally, with Chef JJ at Maynard's Restaurant, I feel like I actually have the chance to pick my own and try different ingredients, going a little bit out of the safe zone and being creative. For example, on Saint Patrick's Day, we actually had a pizza that was the color of the Irish flag! I chose three different sauces that perfectly matched the colors I wanted. It was really fun and tasty too. We also have a Chef's Choice pizza option that changes constantly, So I'm usually changing the pizza around with what's available locally. We end up with a lot of seasonal ingredients that we love to use on our pizza.

So I feel like I want to go hardcore on pushing the quality of pizza that I want instead of just going for standard types of Pizza. I want to stay with the traditional Italian base and expand from there. There are too many American-style pizzas around, It's kind of getting washed out. There are a lot of different food cultures with pizza in America but it's difficult, especially around our section of the West coast, to find a good Italian pizza. But now at Maynard's Restaurant, I finally have a chance to create what’s missing in pizza here.

Now for a limited time, Try any of our Artisan Pizzas for just $12.99!

Summer is the perfect time to taste the magic that Chef Lorenzo brings to Maynard's Restaurant.